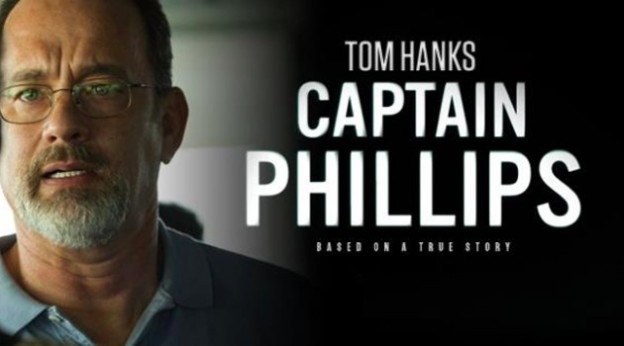 So, I was blessed to see the new film Captain Phillips with Tom Hanks at a sneak preview last weekend. I highly recommend you see it as well. Beyond it being an extraordinary story of heroism and survival, Gospel themes abound! Before your read further, there are some reveals in this article that you may not want to know about before you see the film. So, fair warning.

The film is based on the 2009, real life capture of Captain Richard Phillips. Phillips was the Captain of the merchant marine vessel Maersk Alabama, that was hijacked by Somali pirates in international waters near the Cape of Africa. When all attempts to defeat the pirates fail, the Navy sends in Seal Team Six to rescue the Captain. Tom Hanks plays Phillips. Let me just say
Hanks performance is extraordinary. He is Captain Phillips. From the New Englander accent, to the goatee, he is Phillips. If this performance does not earn an Academy Award nomination, I will be very shocked.

This film is tense, captivating and completely fascinating. It is a study in the psychology of self-sacrifice, heroism and survival. There is violence to be sure, but it is not gratuitous, and thankfully sensitively handled. But what makes this film so special, is the conduct of the Captain. He willingly offers himself as a target and a hostage. And although he never loses sight of his captors as desperate, dangerous men, he offers medical aid and true concern for their well-being.

Phillips remains cool, calm and smart. He is cooperative and even helpful. But as the head Pirate, Muse’s intelligence and determination begin to surface, Phillip’s recognizes the desperate situation he is in. Muse is just as calm and cool as Phillips. He is unnervingly patient and calm. Muse’s life is examined in small bits and pieces. A line here and a line there begin to reveal the heart of this man. His line “I am the Captain now,” is downright chilling. He is a man who is trapped by the world’s economy and his own people. His choices are those of a person who has no hope. Yet, he remains hopeful that the capture will end well for all concerned. He is very determined to for his plan to succeed. As they speed toward Somalian waters in the Alabama’s tiny lifeboat, one thing becomes very clear. Muse is every bit the equal to Phillips.

The film has tons of parallels to the Gospel message. When you watch it, you will need to look beyond the intense drama-if you can. From the start of the film, Phillips is twitchy about the job. But he takes command of the vessel anyway. He makes sure his men are ready for any contingency. He protects them and puts them first. He sacrifices himself for them and gives them last minute instructions as he is being captured. He treats his captors with respect and, shows genuine concern and care for his enemy. Sound familiar? Phillip’s is clearly seen as a Messianic figure. And it could be argued that Muse is the embodiment of sin nature in man.

When the US Navy intervenes in the situation, Phillips tries to let his captors know that the Navy “cannot lose” in this situation. Muse understands the ramifications. And he counters with “I can not lose.” It smacks strongly of our human sin nature and how despite God’s abundant love, we put ourselves and our desires first. The Navy’s powerful presence is overwhelming. To the shock of the Pirates, the Navy knows everything about them. They flood the lifeboat with light and noise and although they are respectful and patient with the Somalians, they make it know what needs to be done to save Phillips. Muse knows the Navy is about to take control of the situation. When the Navy offers a gracious way out, Muse takes it-leaving his fellow captors to suffer the consequences of Seal Team Six’s expertise.

As Phillips desperately tries to write a goodbye note to his family, the three remaining captors begin to panic. They strip him, beat him, blindfold him, tie him and put a gun to his head. He cries out to the Navy for them to act-for them to end his ordeal. And Seal Team Six complies. And when it is over, he is covered with the blood of his captors. As he recovers on the Navy ship, gratefulness, grace and tears of joy rain from the screen and the audience. It is a truly beautiful scene that is allowed to run. We witness the healing process that trauma survivors must begin and weep with Phillips as he realizes that he is on his way home to his family. It is a marvel of a scene. It is a lesson that with the Lord where there is tragedy, there can be Grace. And where there is chaos, peace can abound. If you would like to share your comments about this film, we’d love to have em.

A Call For Christian Commedies