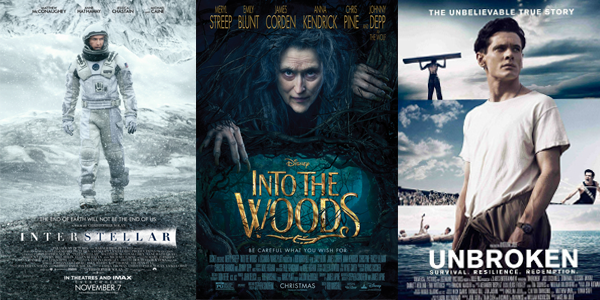 Ok. So this is a little late. But with the Holidays and travel, I have just now finally seen most of the films released during December. So let me just say, whew! I ate way too much popcorn. But, in general, the films were pretty good. They were certainly worth seeing. If I may, I’d like to recap the films.

Into the Woods is simply wonderful! If you liked the Broadway musical, you won’t be disappointed. Even after Disney Disneyfied it, (it actually is much more risque and darker on Broadway) it is a wonderfully, clever Stephen Sondheim musical with a great story, very talented performers with fantastic vocal performances. I won’t say anymore in case you haven’t seen it, but Cinderella’s song as her shoes are stuck in pitch on the stairs of the Prince’s palace is simply fantastic. There is not a weak link in the cast including Meryl Streep as the witch, Johnny Depp as the Wolf and Emily Blunt who is fantastic as the Baker’s Wife. The kids Daniel Huttlestone as Jack (Les Mis) and Lilla Crawford as Red Riding Hood (Annie) steal the show.

Fair warning. there is plenty of humor but it ‘s a bit of a fractured fairytale gone awry. So be aware, it’s not for little kids. Oscar nominations should be had by the handful for this film.

Interstellar is also a very, very good film. The story is wonderfully told by master director, Christopher Nolan. It is quite different from the normal Hollywood fare and very welcome. It’s clever with amazing special effects, exploration of theoretical physics and space travel in the future. (If you can see this film on IMAX it is totally worth it. The launch and space sequences are incredible on the bigger screen.)

The film is also quite uplifting with the whole premise revolving around one man’s sacrifice to save his family and the dying planet. The cast is stellar (oops . . .sorry). Matthew McConaughey is at his very best in his role of devoted dad in a dying, decaying world. It was really a joy to watch this talented actor play a role where his character sacrifices everything for the good of his family and to save the world. Go see it and take your non churched friends. Lots of discussion could happen after this film. It should have some Oscar nominations coming it’s way as well.

Unbroken was such a great, great book. It was hard for me to let go of the wonderful writing and allow myself to see the film as, just that, a film based on the book. I was so looking forward to this wonderful story on film. But, sigh, I have to say that I was a little disappointed. The film did stay true to the book, the characters, the plot, and the amazing story of Louis Zamperini. The performances were excellent. The production quality was excellent. But in my opinion-for what it’s worth, which is not a whole lot-it just missed. There was just something very important missing in this film. I think that it was the acknowledgement of God’s protection and presence in Zamperini’s life woven into the film. Although there was definitely a faith element in the film, it wasn’t as prominent as in the book. But I don’t know. It was just missing the emotional punch the book oozes.

Now that is not to say that this film is not worth seeing. It is definitely worth seeing Unbroken. So much can be learned and discussed regarding this amazing story and life of this amazing man. And if it leads audiences to reading the book, well, all the better.