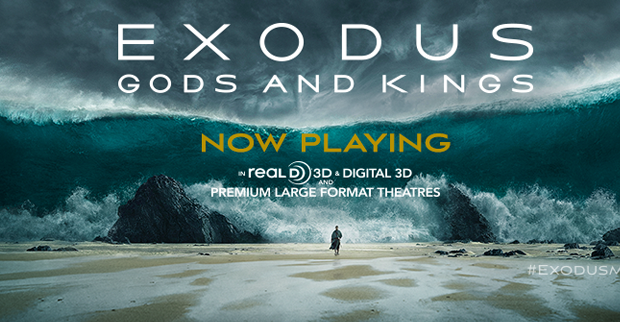 Ok.  Well.  For what’s it’s worth, (which is not a whole lot) I was pretty disappointed with the execution of Exodus: Gods and Kings.  With all due respect to the extraordinarily talented filmmaker, Mr. Ridley Scott, the film has serious story telling issues.  Now please don’t misunderstand.  Ridley Scott is an amazing filmmaker.  He has scared the bejabbers out of us with Alien, delivered an elegant, melancholy sci-fi with Blade Runner and created such a noble story in Gladiator.  These films are all engaging, exceptionally well crafted and were just a joy to watch (except for Alien which remains to this day one of the best and scariest films I personally have ever seen).  But Exodus just doesn’t tell the story of Moses leading Israel out of Egypt in a way that audiences can relate to.  The film starts off just great, but as we get into the conflict between Ramses II (Joel Edgerton) and Moses (Christian Bale) it quickly loses it’s way.

This is a story the entire world knows.  Billions of people revere it.  There are certain expectations within it that audiences wait for and expect to see in a film about Moses.  But Exodus: Gods and Kings takes a very different journey.  And my personal opinion, (again, for what it’s worth) is that this new interpretation does not serve the film, the audience or the filmmaker.  Nor does it deliver one of the greatest stories in all of history.  It simply does not work.

Now, I am all for freedom of expression and creative interpretation in fiction and filmmaking.  This is necessary and allows authors and filmmakers to show us the world of the production and to engage us.  This is especially true with historical productions.  But to invent a different interpretation of the very character of Moses is not remaining true to his story or his place in History or the Bible.  And frankly, it will probably make some folks pretty, hopping mad.

Ridley’s Moses is a warrior and a very effective general.  He is quick to make a sound decision, studied in the art of war, fights like Batman, (uh- hem, er,  sorry), elegant of speech and not shy about expressing his very certain opinions.  Christian Bale, as Moses, does a fine job bringing the words on the page to life.  Unfortunately, it’s the wrong Moses.  Joel Edgerton is wonderful as Ramses II.   His character is spot on.  Ramses II is stubborn, conflicted, a little clueless and clearly has internal demons.  As the young “brothers” fight side by side, there is true respect, admiration and a bit of jealousy evident.  As Moses’ true identity is revealed, Ramses can’t bring himself to kill his brother.   So as the story goes, Moses is exiled.  Even when Moses marries Zipporah the story is tracking fairly well-except for the Moses as warrior thing.  But the film begins to unravel as Moses is chasing sheep up the mountain in the rain.  A mud slide buries him leaving only his face visible and God in the form of a little kid with attitude shows up.  Say what?!  And that is where the film jumps off the bridge into very, deep, troubled water.  Well, I paid my money.  And so I decided I’d stick with it to the end.  But when Moses winds up carefully chiseling the Ten Commandments himself with the bratty kid telling him what to write, well, let’s just say, I was looking for my popcorn and checking my watch.  I have to admit, I even got my cell phone out and texted my daughter.  The audience didn’t even wait for the credits to roll.  They were leaving the theatre in the dark!

Now that’s not to say that there was nothing good in this film.  The cinematic execution of the 7 plagues (although sensationalized) are pretty impressive.  The sets and locations were incredible.  And Scott masterfully created the world and attitudes of the time.  And it was very interesting to see the difficulties and dangers of travel in the time period.  But on the whole, the film felt, to me, (again for what it’s worth) like a humanistic explanation of the Bible Story of Moses.  Which is not what I was hoping for or expecting.  Bummer.

So, I have to ask the question, why?  Why wasn’t this story told with the characters and elements as written down in the Bible?  It’s an incredible story of faith, obedience, and courage.  It’s got family drama, romance, battles, adversity, special effects up the wazoo, and miracles galore.  Why wasn’t that enough?  Did the production team really think they could improve the story?  Or did they simply wish to provide a more logical explanation of what might have happened?  I don’t know.  It just seems to me that if you have this incredible story, Christian Bale and Joel Edgerton, an enormous budget, special effects at your finger tips and Ridely Scott at the helm, you could tell one of the greatest stories of all time and rule the box office for a year.  Producers, directors, actors, we are waiting and we are begging you!   Please, please, please, just one time, try to tell a Biblical character’s story as it is written in the Bible, using all your fantastic resources.  Audiences are ready and waiting.  If you do this, your pockets will be full with ticket sales.

Now despite what I wrote, I still think you all should see this film.  Just like Noah, many non-churched folks will see it and will be talking about this film.  There is so much misinformation and incorrect interpretation in it that there are bound to be lots of confused people out there.  You can help explain the inconsistency, the character traits of Moses, and that Aaron should have included in the film and make sure folks know the real story.

HOLIDAY FILM REVIEWS-Unbroken, Into the Woods, Interstellar
Scroll to top